My knowledge of federal white collar criminal law has long put me in demand with the major media to help analyze national white collar news stories. My experience and contacts with television, print and online journalists enable me to tap those resources to the benefit of my clients in the rare circumstances that such a strategic need arises. I am also a Fox News Contributor and Contributing Editor of the White Collar Crime Prof Blog. Some of my recent appearances in the media appear below.

Skullduggery, Feb. 11, 2021. I was a guest on the Skullduggery Podcast, discussing the second impeachment of Donald J. Trump.

The Faulkner Focus, Feb. 9, 2021. I discussed whether it was constitutional to impeach and convict a former president of high crimes and misdemeanors.

The Ingraham Angle, May 15, 2019. Along with Rudy Giuliani, I discussed multiple subpoenas for Trump-related materials issued by the House Judiciary Committee.

The Ingraham Angle, May 8, 2019. I analyzed the emerging importance of Attorney General William Barr.

Los Angeles Times, April 18, 2019. I commented upon Robert Mueller’s decision not to subpoena President Trump to appear before the federal grand jury.

The Ingraham Angle, March 22, 2019. I reacted to the Mueller’s Report’s transmittal to Attorney General William Barr.

Washington Post, March 2, 2019. I was quoted in an article discussing the Mueller Report’s upcoming release.

CNN’s Inside Politics With John King, Dec. 10, 2018. I analyzed the Michael Flynn sentencing hearing as it unfolded.

Meet The Press Daily With Chuck Todd, Dec. 4, 2018. I explained why President Trump’s criticisms of Michael Cohen did not constitute witness tampering.

PBS News Hour, Aug. 20, 2018. I discussed executive privilege and attorney-client privilege in the context of the White House Counsel’s Office.

CNN’s Inside Politics With John King, Aug. 17, 2018. I was interviewed regarding jury deliberations in the Paul Manafort trial.

Meet The Press Daily With Chuck Todd, Aug. 2, 2018. I explained the law surrounding efforts to subpoena a sitting U.S. president.

The Ingraham Angle, Aug. 1, 2018. Professor Alan Dershowitz and I discussed Special Counsel Mueller’s referall of select matters to the U.S. Attorney’s Office for the Southern District of New York.

Money Magazine, June 14, 2018. I was quoted regarding the salary of attorneys working on Special Counsel Mueller’s staff.

New York Times, May 30, 2018. I shared memories of questioning President Bill Clinton before the federal grand jury in the Lewinsky Investigation.

MSNBC Live With Alex Witt, May 27, 2018. I commented on the FBI’s use of a Confidential Human Source to infiltrate the Trump Presidential Campaign.

The Ingraham Angle, May 16, 2018. I joined Brett Baier to provide instant analysis on Ms. Ingraham’s interview of Rudy Giuliani.

CNN’s Inside Politics With John King, May 3, 2018. I criticized Rudy Giuliani’s maiden interview as President Trump’s personal attorney, comparing it to a murder-suicide.

Anderson Cooper 360, May 2, 2018. I discussed the historic case of U.S. v. Nixon for its relevance to Special Counsel Mueller’s ability to question President Trump under oath.

MSNBC’s The Beat With Ari Melber, May 2, 2018. I analyzed whether Special Counsel Mueller has the authority to litigate issues pertaining to Executive Privilege.

NPR’s All Things Considered, May 1, 2018. I commented on the breadth of Special Counsel’s Mueller’s proposed questions to be asked of President Trump.

CNN’s Inside Politics With John King, May 1, 2018. I discussed the dangers inherent in Robert Mueller’s proposed questions to President Trump.

The Ingraham Angle, Jan. 23, 2018. I discussed irregularities in the FBI’s Application to the FISA Court.

The 11th Hour With Brian Williams, Jan. 5, 2018. I was interviewed regarding possible obstruction of justice charges against President Trump.

The 11th Hour with Brian Williams, Dec. 1, 2017. I was interviewed about the Michael Flynn guilty plea and plea bargaining agreement.

Bloomberg News, Dec. 1, 2017. I predicted that the Logan Act would not be used against any individuals by Special Counsel Mueller.

Wall Street Journal, Nov. 15, 2017. I analyzed the jury deadlock and mistrial in the prosecution of Senator Bob Menendez.

The Ingraham Angle, Nov. 14, 2017. I discussed whether a Special Counsel should be appointed to investigate the Uranium One scandal.

Hardball With Chris Matthews, Nov. 3, 2017. I commented on President Trump’s frustration with his own Department of Justice.

Politico, Nov. 3, 2017. I critiqued President Trump’s effort to have the Department of Justice investigate whether the 2016 Democratic Primary was rigged in favor of Hillary Clinton.

The 11th Hour With Brian Williams, Oct. 30, 2017. I discussed the Paul Manafort Indictment and other developments in Special Counsel Mueller’s investigation.

Wall Street Journal, Oct. 30, 2017. I gave my opinion regarding the relationship between the Manafort Indictment and the broader investigation by Special Counsel Mueller.

NPR’s All Things Considered, Oct. 30, 2017. I opined upon the ramifications of the George Papadopoulos Plea Agreement.

Politico, Oct. 12, 2017. I discussed Separation of Powers in the context of the Special Counsel’s Office interviewing President Trump.

Time Magazine, Sept. 22, 2017. I commented upon the pace of Special Counsel Mueller’s investigation.

NBC Nightly News, June 2, 2017. I examined whether President Trump may have waived any future claim of Executive Privilege by publicly tweeting about matters under investigation.

NPR’s All Things Considered, May 6, 2017. I was interviewed by Carrie Johnson regarding the dismissal of all federal health care fraud charges against Maryland pharmacist Reddy Annappareddy, based on the trial court’s finding of prosecutorial misconduct.

The Hill, April 7, 2017. I criticized the prosecution’s tactic of using a Congressional staffer as a confidential informant in the case of former Congressman Aaron Schock.

Daily Kos, March 30, 2017. My explanation of Proffer Agreements was quoted at length by Greg L. Wood.

Reuters, Sept. 13, 2016. I commented on the FDA’s alleged leaking of grand jury materials.

Baltimore Sun, Sept. 6, 2016. I was quoted at length regarding a federal court’s dismissal with prejudice of all charges against Maryland pharmacist Reddy Annappareddy.

The Hill, April 30, 2016. I criticized the legal theory behind the prosecution of former Virginia Governor Bob McDonnell.

Above The Law, Oct. 15, 2015. My views on the Yates Memo were discussed in an article about transitioning for federal prosecution to federal defense work.

Cincinnati Enquirer, July 18, 2015. I commented on disclosure requirements for ex-felons.

Wilmington News Journal, April 23, 2015. I was quoted in an article about the sentencing hearing of a man charged with computer hacking.

Wall Street Journal, May 12, 2014. I commented on the FCPA indictment of PetroTiger’s CEO.

Reuters, Sept. 11, 2012. A Reuters article quoted me regarding the $104 million whistleblower award given by the IRS to UBS AG whistleblower Bradley Birkenfeld.

Today Show, May 30, 2012. The Today Show interviewed me regarding the jury’s lengthy deliberations in the John Edwards trial.

Main Justice, April 12, 2011. My views on the Raj Rajaratnam case were analyzed by David Stout at MainJustice.com.

Inside Counsel, April 1, 2011. I was quoted extensively in Steven Anderson’s article about the lack of accounting control fraud prosecutions. The article is entitled, “Incredible Weakness: Amid Financial Crisis Accounting Control Fraud Prosecutions are Scarce.”

USA Today, July 16, 2010. I was interviewed regarding Goldman Sachs’s settlement of civil charges brought by the SEC.

To the Point, June 24, 2010. I analyzed the U.S. Supreme Court’s three honest services fraud decisions on National Public Radio’s To The Point.

Chicago Daily Law Bulletin, May 20, 2010. I was quoted in an article covering a panel presentation on managing high-profile criminal investigations. The presentation was held at Chicago’s Union League Club.

MSNBC News, Jan. 27, 2010. I was interviewed by MSNBC’s David Shuster regarding the alleged wiretapping of Senator Mary Landrieu’s office.

MSNBC’s Big Picture, Dec. 3, 2009. I was interviewed regarding possible charges against Tareq and Michaele Salahi, who allegedly crashed a White House State Dinner.

New York Daily News, May 26, 2009. I was quoted in an article entitled, “Sonia Sotamayor’s Timing For Supreme Court Could Not Be Better.”

Chicago Lawyer, March 4, 2009. I was quoted in an article entitled, “Around The Water Cooler: Solomon L. Wisenberg‘s White-Collar Practice.”

The National Law Journal, Feb. 16, 2009. I was mentioned and photographed in an article entitled, “Law Firm Couples Not So Rare.”

CNBC’s Closing Bell, Jan. 12, 2009. I discussed the implications of a possible plea bargain in the Bernard Madoff case.

Wall Street Journal, Jan. 9, 2009. I was quoted in a story about the government’s dismissal of charges against my client in the case of U.S. v. Stockman, et al.

CNBC’s Power Lunch, Jan. 6, 2009. I debated whether Bernard Madoff should be allowed to remain free on bond.

Westlaw Seminar, Dec. 18, 2008. I was a featured speaker and panelist in WestLaw’s Web Seminar on Battling Health Care Fraud: Criminal and Civil Perspectives.

New York Daily News, Dec. 10, 2008. I was quoted in an article that discussed whether the Blagojevich scandal would ensnare the incoming Obama Administration.

Northwest Florida Daily News, Nov. 18, 2008. I was quoted in article covering the dismissal of all charges against his client in an alleged insurance fraud scheme.

New York Daily News, March 20, 2008. I was quoted regarding the release of Senator Clinton’s White House schedule by the National Archives.

Legal Times, Aug. 20, 2007. I discussed new rules for federal grand jury witnesses in light of the D.C. Circuit’s In re: Grand Jury decision.

Hardball with Chris Matthews, March 27, 2007. I analyzed the Fifth Amendment Privilege Against Self-Incrimination in the context of the U.S. Senate’s investigation into the firing of federal prosecutors.

New York Daily News, Feb. 14, 2007. I discussed the impact of Vice President Cheney’s failure to take the stand in the Scooter Libby case.

Hardball with Chris Matthews, Feb. 7, 2007. I was interviewed regarding sentencing-related issues in the Libby case.

International Security Management Association (“ISMA”), Jan. 23, 2007. I spoke on “Pretexting: Is it Legal; Is It Ethical?” at the ISMA Conference in Austin, Texas.

CNBC’s Power Lunch, Jan. 16, 2007. I analyzed the SEC’s inquiries into public company employees who get paid on the side (as consultants) to discuss industry trends with hedge funds.

MSNBC’s Abrams Report, May 3, 2006. I analyzed the jury’s life sentence verdict in the Zakaria Moussawi case.

Hardball with Chris Matthews, April 20, 2006. I discussed the difference between a subject and a target in the context of federal criminal investigations.

Hardball with Chris Matthews, March 10, 2006. MSNBC’s Chris Matthews interviewed me regarding the latest tactical moves of the Libby defense team.

Wall Street Journal Online, Feb. 21, 2006. An article by Brandt Goldstein in the Wall Street Journal’s Online Edition quoted me on the relevance of law review articles to the everyday practice of criminal law.

Washington Post, Nov. 20, 2005. A front page story on the Abramoff Investigation in the Washington Post’s Sunday Edition, quoted me on the mechanics of plea negotiations.

MSNBC’s Countdown with Keith Olberman, Nov. 16, 2005. I analyzed the impact of Bob Woodward’s disclosure that a Bush Administration official leaked information to him about Valerie Plame’s CIA status.

MSNBC’s Hardball with Chris Matthews, July 13, 2005. I discussed the potential exposure of Karl Rove in the CIA leak case.

MSNBC, December 2004. I appeared on MSNBC’s Abrams Report, debating whether reporters should go to jail for refusing to divulge the names of their confidential sources.

The Washington Post, Feb. 10, 2004. A front-page Washington Post story on federal grand jury questioning of White House officials in the CIA leak probe featured a quote from me on reporters’ news-gathering privileges in the context of criminal investigations.

United Press International, Aug. 21, 2002. I was interviewed by UPI regarding my representation of an American University student arrested for taping a speech by Tipper Gore.

Fox News, Aug. 20, 2002. I appeared on the Fox News show Hannity and Colmes to discuss his representation of an American University student arrested for taping a speech by Tipper Gore.

CNBC, Aug. 20, 2002. I discussed insider trading and the Martha Stewart/ImClone scandal as a guest on CNBC’s Kudlow & Cramer.

Fox News, May 30, 2002. I appeared on Fox News to discuss the legal issues surrounding the Chandra Levy case. 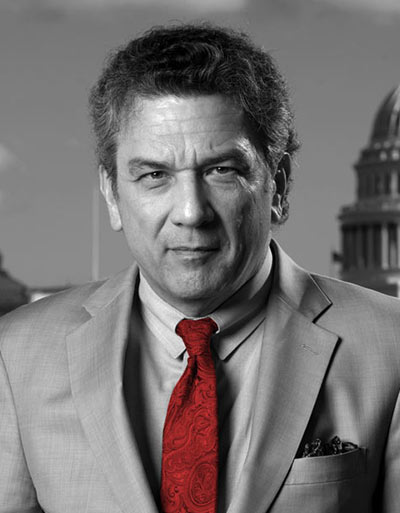